Item Name and Description: Cyber Warefare - Mapping the Cyber Underworld signed to you personally.
Starting Bid: 25$
Notes: This will be mailed out worldwide as soon as payment notification is sent.
Email: bitchcat at earthlink dot net

Notes: will ship anywhere, so long as bid matches shipping cost! It's a hefty book. 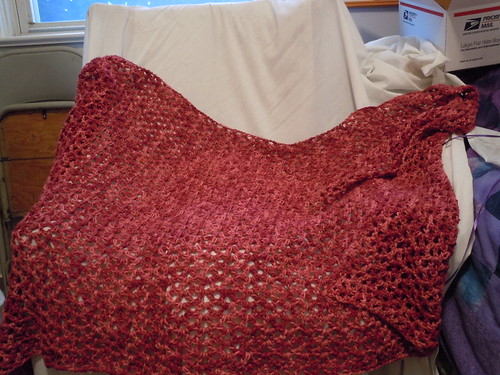 All are in readable condition; the September has two crumpled pages (35-36 and 37-38) apparently due to an accident of storage, but the pages can be flattened out and read easily enough. click here to see those two pages on flickr.

Notes: Will ship within US or Canada after receiving notification of payment. 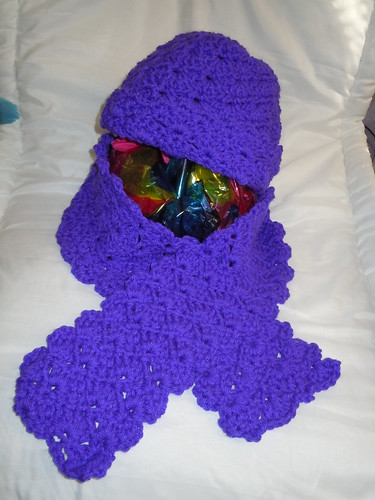 Notes: Will ship within US after receiving notification of payment.

People of the Big Voice tells the visual history of Ho-Chunk families at the turn of the twentieth century and beyond as depicted through the lens of Black River Falls, Wisconsin studio photographer, Charles Van Schaick. The family relationships between those who “sat for the photographer” are clearly visible in these images—sisters, friends, families, young couples—who appear and reappear to fill in a chronicle spanning from 1879 to 1942. Also included are candid shots of Ho-Chunk on the streets of Black River Falls, outside family dwellings, and at powwows. As author and Ho-Chunk tribal member Amy Lonetree writes, “A significant number of the images were taken just a few short years after the darkest, most devastating period for the Ho-Chunk. Invasion, diseases, warfare, forced assimilation, loss of land, and repeated forced removals from our beloved homelands left the Ho-Chunk people in a fight for their culture and their lives.”

The book includes three introductory essays (a biographical essay by Matthew Daniel Mason, a critical essay by Amy Lonetree, and a reflection by Tom Jones) and 300-plus duotone photographs and captions in gallery style. Unique to the project are the identifications in the captions, which were researched over many years with the help of tribal members and genealogists, and include both English and Ho-Chunk names.

This book is a large hardcover in near-mint condition.

Notes: I will pay for shipping within the U.S.

In recent years, otaku culture has emerged as one of Japan’s major cultural exports and as a genuinely transnational phenomenon. This timely volume investigates how this once marginalized popular culture has come to play a major role in Japan’s identity at home and abroad. In the American context, the word otaku is best translated as “geek”—an ardent fan with highly specialized knowledge and interests. But it is associated especially with fans of specific Japan-based cultural genres, including anime, manga, and video games. Most important of all, as this collection shows, is the way otaku culture represents a newly participatory fan culture in which fans not only organize around niche interests but produce and distribute their own media content. In this collection of essays, Japanese and American scholars offer richly detailed descriptions of how this once stigmatized Japanese youth culture created its own alternative markets and cultural products such as fan fiction, comics, costumes, and remixes, becoming a major international force that can challenge the dominance of commercial media. By exploring the rich variety of otaku culture from multiple perspectives, this groundbreaking collection provides fascinating insights into the present and future of cultural production and distribution in the digital age.

This book is a large paperback in near-mint condition.

Notes: I will pay for shipping within the U.S.

We have moved to reading almost exclusively in electronic format, and as a result are getting rid of many books that we will never (re-)read in paper. Six hundred fifty-five of them, to be precise.

The top three bidders will give me a prioritized list of books from the above link, and I will fit as many as I can into each winner's box. If the lists overlap I will allocate the books based on priority, space, and if necessary the flip of a coin; my decisions are final.

Notes: U.S. only; the USPS will ship these flat-rate boxes internationally but it is very expensive. If anyone is nevertheless seriously interested in international shipping, drop me a comment and we'll talk.

Bid in one thread, please; again, top three will win.

I'd post the book covers and the back cover copy but honestly, neither of them really describe the book very well, as neither offer any hint as to the development of first Princess, then Queen Victoria through her romance with Prince Albert and her following marriage, the intrigues that follow, and the parallel arcs involving some incredible side characters. I have a review of this book here.

Table of contents:
The Witch's Headstone, by Neil Gaiman
Holly and Iron, by Garth Nix
Color Vision, by Mary Rosenblum
The Ruby Incomparable, by Kage Baker
A Fowl Tale, by Eoin Colfer
Slipping Sideways Through Eternity, by Jane Yolen
The Stranger's Hands, by Tad Williams
Naming Day, by Patricia A. McKillip
Winter's Wife, by Elizabeth Hand
A Diorama of the Infernal Regions, or The Devil's Ninth Question, by Andy Duncan
Barrens Dancing, by Peter S. Beagle
Stone Man, by Nancy Kress
The Manticore Spell, by Jeffrey Ford
Zinder, by Tanith Lee
Billy and the Wizard, by Terry Bisson
The Magikkers, by Terry Dowling
The Magic Animal, by Gene Wolfe
Stonefather, by Orson Scott Card 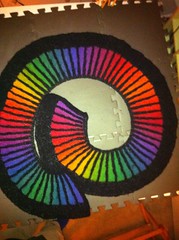 That picture is another version of the same scarf. The scarf being offered has charcoal gray yarn setting off the rainbow yarn, and this skein of rainbow yarn is a little more muted.

Notes: This scarf is a pretty fast knit; I will be able to mail it by the start of April. Willing to ship internationally. ETA 2/22/12: I do own cats; I endeavor to keep my knitting as cat-hair free as possible, but some is unfortunately inevitable. Notes: I will mail as soon as I get confirmation of the winning bid.

Item Name & Description: Hardcover copy of the MIRRORMASK novella, story by Neil Gaiman, art a combination of stills from the movie and Dave McKean's artwork. (Dave McKean is the guy who did the covers for Gaiman's Sandman tradebook series.)

I was gonna look for a TOC but the back cover copy was too good to resist:
MAD SCIENTISTS! HARD-BOILED DETECTIVES! VENGEFUL GODDESSES! MURDEROUS ROBOTS! SCANDALOUS STARLETS! DRUG-FUELED LOVE AFFAIRS! Stories by 10 of India's best-selling Tamil authors... translated into English for the first time!

Item Name & Description: Dante's Inferno with translation by Michael Palma. A bi-lingual text: Italian on one side, English on the other.

Item Name & Description: 2 books at one go in this set: STRANGE PILGRIMS by Gabriel Garcia Marquez, translated by Edith Grossman, and FULL WOMAN, FLESHLY APPLE, HOT MOON, selected poems by Pablo Neruda, translated by Stephen Mitchell. FULL WOMAN is a bi-lingual book: original on one side, English on the other.